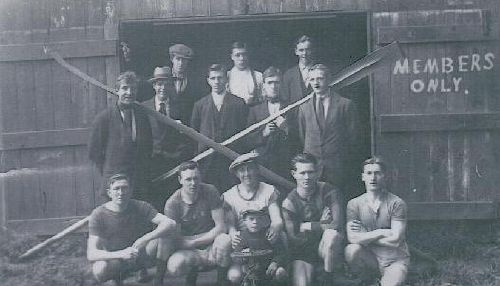 Professional rowing at Chester-le-Street on the River Wear started in the 1870s with professionals earning their money in challenge matches against rowers from other areas. The Club also started out in 1888 as a professional one, later changing its status to Amateur.

Professional racing often attracted huge crowds and massive amounts of money changed hands. Occasionally, 'ringers' were introduced to build up the betting by losing a couple of races, then coming good later when pitted against local favourites. This often meant a quick exit with winnings stuffed in pocket to avoid a lynching by a partisan crowd.

The rowing club initially rowed out of a boathouse in the park; the access to the river was by a set of steps now overgrown just above the wear. In the 1930’s this boathouse burnt down and was replaced with a new timber structure that carried an advert for “ Dainty Dinah Toffee”, a product of George Horner's Chester-le-Street toffee factory. For many decades the Club was able to row some distance around sharp bends and even eights could navigate them with care to continue upstream to allow rowing of around 1,500 metres. Unfortunately, over time, he river has silted up and banks have given way to restrict rowing to a much shorter stretch of water.

The rowing club was very strong in the 1950s and won many regattas throughout the area. Sadly as the members aged the demand for rowing saw a downturn and the club struggled, then closed for a few years. The boats rotted away hung on the sides of the building and when Bob Heywood resurrected the club in the 1980s there was not a lot to row in. A kind sponsor donated three boats and the club managed to hang on by its teeth to a time when the numbers started to increase again and new blood came into the club to lay the foundations of the club seen today. A significant rower in modern times was Victoria Bryant who became a world champion when she rowed in the under-23 ladies eight.