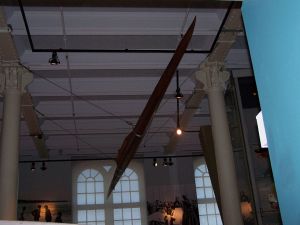 An interesting exhibit exists in the Tyne & Wear Museums. An extremely fragile and lightweight boat (for a 9 stone sculler) named the J.A. Hutchinson, was used in professional racing and was originally at Tyne United Rowing Club, but moved to Blyth RC upon their closure in the 1960s. Boats on the river Tyne were often named after a patron who had paid for it to be built. This boat was probably named after James Arthur Hutchinson, Mayor of Gateshead in 1951, a printer by trade who had lost a leg in the First World War, and then later had his other leg amputated. The boat was bought by Tom McParlin from a Ken Shanks in probably in the late 1950s. The agreed price was 6d and a receipt exists for this. Tom rowed on the Tyne for the Tyne United Rowing Club. The scull had been built for a 9 stone sculler and that would tally with the very fine lines – it would not have sufficient buoyancy to support a bigger man.

Tom was in the boat on the Tyne during a Tyne v Thames race during the 1960s. He was in the built up area of the river around the bridges when he began to sink. He got over to the Gateshead side of the river and, hanging on to the timber fenders on the wall, he got out of the boat while clinging on to it; not easy with the tide running, and he would be lucky to catch it at slack water. The river police came over and despite his protests, they snagged the boat with a boat hook, damaging it in the process. It went back to Tyne United Rowing Club, but was not repaired and was never used again.