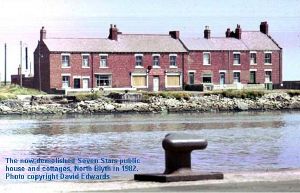 North Blyth Rowing Club was based at the Seven Stars pub in North Blyth. The Seven Stars pub was situated in a small row of houses which were all demolished in the 1980s and replaced by the Alvance (formerly Alcan) bulk silica loading jetties. North Blyth is today made up of only three short streets but it was once a thriving mining and seaport town. The Club had a very short life of no more than six years, as a new club, the Blyth Rowing Club, was formed in 1899 at a time when it was stated there were no other clubs on the river.

2nd December 1893
The Newcastle Daily Chronicle reported:
The first open boat handicap in connection with the North Blyth Rowing Club will be on the river Blyth this afternoon, over the half-mile course from the Wave Trap to a point opposite the club's headquarters, the Seven Stars Inn. Good prizes are offered for the event, and as the competitors are all local men, some interesting racing is expected. There are fifteen entrants, including Jno. Bewick, Old Hartley; Joseph Kennedy, Cambois; Edward Davis, Blyth; William Davison, Link End; Robert Wheatley, Cambois; Thomas Hopper, Link End; George Smith, Cowpen Quay; Thomas Hudson, Link End; William Osborne, Hartford Colliery: Christopher Hogg, Cambois; William Watson, Cambois; and William Young, Blyth. The first heat is timed to start at 1 o'clock, and the opening round will be gone through. The handicap will be concluded a fortnight today.

15th December 1893
The Newcastle Daily Chronicle reported:
North Blyth Rowing Club - The competition promoted under the auspices of tb!s club, and inaugurated a fortnight ago, will be brought to an end on the river Blyth tomorrow. The draw will take place prior to the commencement of the racing. The names of the competitors who will take part are :—Christopher Hogg, Cambois; William Young, Cowpen Quay; William Watson, Cambois; Thomas Hopper, North Blyth; Thomas Smith, Cowpen Quay; and Robert Wheatley, Cambois.

14th March 1894
The Newcastle Daily Chronicle reported:
North Blyth Rowing Club The first annual general meeting of this club was held at the headquarters, Seven Stars Inn, North Blyth, on Monday night. Mr. George Hudson occupied the chair. Formal business having been transacted, and the club being reported to be in a satisfactory condition, a discussion took place to the desirability of promoting a handicap on the local river. It was pointed out that another two open boats had been added to the Boathouse, making up a compliment of 4 first-class open boats, 1 skiff, and 2 "12 feets" at the service of their members. The continued increase in the interest amongst members, while gratifying, was also a circumstance which warranted the organisation of some public competition. It was eventually agreed to make for the holding of a handicap to be commenced at Whitsuntide, and in order to meet the wishes of certain local gentlemen in the town it was decided to issue a subscription list for donations towards prizes, several having notified their desire to subscribe. It was also reported that considerable improvements had been effected at the boat- house, and that a comfortable dressing room had been added. The membership was good and there was every indication of the ensuing season being a flourishing one. Members were afterwards entertained by Mr. Hudson, the meeting in all respects being enjoyable and pleasant.

5th April 1894
The Newcastle Daily Chronicle reported:
As stated on the occasion of the annual meeting of the club, the members intend promoting a handicap on the river Blyth open to all scullers. An announcement to this effect has already appeared in the advertisement columns of the "Chronicle." The event will be commenced on Saturday. Mar 12th, and continued each succeeding Saturday until finished. In organising the competition, the club have met with hearty co-operation from the licensed victualler of the town, the sum of £25 having been subscribed as prize money. The distance will be half a mile, and over the course from a point known as the Wave - Trap to a point opposite the club's head quarters, the Seven Stars. It is part of the river which is comparatively free from traffic of a busy kind, and affords special advantages to sightseers, who will be able to obtain an uninterrupted view of the racing from beginning to end. Competitors can also embark or disembark at any state of the tide, so that there is little to interfere in any way with the venture. The boats to be used in the decision of the event will be provided from Mr. George Hudson's boathouse at North Blyth. and will be the "Scotland" and "Ireland", which it may be remembered were used by Carr and Haines in their match on the Tyne. Already a number of Northern scullers have entered their names as competitors, and included amongst them are T Taggart and J Taylor, of the Walker Rowing Club, J Bewick, of Hartley, and several other oarsmen equally well-known in local aquatic circles.

14th May 1894
The Newcastle Daily Chronicle reported:
Blyth is beginning to assert a petulant position in the aquatic world. Of late several important contests have been settled on the river bearing its name, and public interest in that part of Northumberland has been greatly revived. The North Blyth Rowing Club, which only recently sprang into existence, has already manifested its vigorous constitution by the organisers of an open boat event which is likely to still further attract the attention of followers of aquatics to the port, and bring more forcibly under their notice the exceptional facilities there exists on the local river for conducting sport of the kind. The club's boat-house on the north side of the river is now equipped with a good selection of shells, and its resources during the past few weeks have been considerably strained in supplying the demand of scullers engaged in the handicap, many of whom have put in a lot of useful practice. One commendable feature of the location of the club's quarters is that practically no difficulty is encountered in embarking at any state of the tide, and another thing which tells in its favour is that the course - the half-mile from the Wave Trap to a point near the Seven Stars Inn, at North Blyth - is admirably adapted for sight seeing. In organizing this, their first upon handicap, the management of the club have received generous assistance from such veteran supporters of aquatics as Mr. Thomas W. Gibson, of the Black Bull Inn, Sussex Street, Blyth; Mr. John Mason, of the Queen's Head Inn, Cowpen Quay; Mr. R. Nicholson, of the Gladstone Arms Inn, Cowpen Quay; Mr. George Hudson, of the Seven Stars Inn, North Blyth; and other well-known local gentlemen. Prize money amounting to £25 was offered, and out of the 48 scullers who responded, 37 cried content with the apportionments of the handicappers, so that as an initial venture, the event has commanded very satisfactory beginning. According to arrangements the handicap will be continued each succeeding Saturday afternoon until the final is reached. The inaugural proceedings were favoured with particularly fine weather, and the surface of the river was as smooth as a mill pond. It was 3 o'clock before a start was made, at which time there was a good gathering of people.
Results:
Heat 1 - Noah Robinson, North Seaton, 27, 1; J Weightman, Howdon Dock. 24, 2.
Heat 2 - Philip Storey, Bebside, 28,1; Andrew Deakin, 27, 2.
Heat 3 - G. Wilson, Blaydon 25, 1; Anthony Scott. B1yth. 25, 2.
Heat 4 - Robert Taylor, Mushroom Rowing Club. 27. 1; Fred Osborne, North Blyth Rowing Club, 27, 2.
Heat 5 - J. Hunter, Jarrow RC beat Thomas Hopper, North Blyth
Heat 6 - Thomas Fulthorpe Dunston beat Edward Knox, Wallsend.
Starter: Thomas Lee of Cowpen Square. Distance Judge: Thomas Robinson of Blyth.

18th June 1894
The Newcastle Journal reported:
The £25 open boat handicap promoted by Messrs Hudson and Gibson in connection with the North Blyth Rowing Club, has terminated in a fiasco. In the semi-final heat between John Bewick, of Hartley, and Robert Taylor, of the Mushroom, rowed Monday evening last, two fouls occurred, but Bewick ultimately went in first by some considerable distance. the referee, Mr Brady, of Cambois, being appealed to, he ordered the heat to be rowed over the same evening. Bewick, however, refused to row over again, and Taylor rowed over the course and the heat was awarded to him by the referee. The Bewick party protested against such procedure of the referee. The promoters of the handicap, however, intimated that the disputed heat of Monday last must be rowed over Saturday evening, followed by the final heat, in which William Casson, of Blvth, who secured the bye, would take part. Previous to the time appointed for the heat on Saturday, a written protest was handed in by Taylor, of the Mushroom, to the promoter of the handicap against Bewick taking any further part in the handicap, as he (Taylor) was abiding by tb© decision of the referee. At about five o’clock on Saturday evening, Taylor appeared on the scene with his sculls, prepared to row in the final heat with Casson. The open boats in which the handicap been rowed, however, could not be procured and consequently there was no racing.

3rd July 1894
The Newcastle Daily Journal reported:
The Blyth Open Boat Handicap - Mr George Hudson, of the Seven Stars Inn, North Blyth, who holds the prize money for the £25 open boat handicap organised under the auspices of the North Blyth Rowing Club, has been served with a summons to appear at Morpeth County Court on Monday next at the instance of T. Taylor, of the Mushroom Rowing Club, who claims one-half of the first and second prize money. It is inferred from this action on the part of Taylor that Bewick's objection has been entirely set aside and that Casson, of Blyth, has arranged to divide the prize money with Taylor. This, however, does not appear to be accurate. Casson, accompanied by Mr Anthony Scott, who is looking after the interests of the Blyth sculler, called at our Blyth office yesterday and desired to make our columns the medium for publicly stating that no arrangement has been made with Taylor for a division. Casson's position is simply this: It is immaterial to him how the dispute between Taylor and Bewick may terminate; he has qualified and is willing to row either for first prize, but will not divide. The keenest local interest has been aroused at the unpleasant state of affairs, and the issue is being eagerly awaited.

9th July 1894
The Shields Daily Gazette reported:
THE BLYTH ROWING DISPUTE - At the Morpeth County Court today, before His Honour Judge Seymour, Robert Taylor, of the Mushroom Rowing Club, Newcastle, brought action against Robert Hudson, the Seven Stars Inn, North Blyth, to recover £11 10s, being half of the first and second prizes offered in open boat competition at North Blyth on June 9th. His Honour found for the plaintiff the amount claimed.

1st May 1897
The Sporting Life reported:
DEATH OF MR. GEORGE HUDSON. OF NORTH BLYTH. We regret to announce the death, which occurred on Thursday night, of Mr. George Hudson, of the Seven Stars Inn, North Blyth. Mr. Hudson took great interest in aquatic affairs m the district, and no man could have worked more energetically to revive public interest the once popular river sport. A few years ago he was instrumental in founding the North Blvth Rowing Club, of which he was president.