The Northern Rowing Club existed on the north bank of the Tyne, at the foot of the Forth Banks in the centre of the city. During the 1939-1945 World War Two, the boathouse suffered bomb damage. The club was compensated to the tune of £1,000.

14th April 1868:
The Newcastle Daily Mail reported:
Yesterday afternoon the members of this permanent aquatic club held a procession on the Tyne, and afterwards proceeded to Mr Jewitt’s, Dunston, to witness the launch of the beautiful racing boats, built by that far-famed builder. The occasion was one of much pleasure, and when the really excellent boats had been placed in their element the rowers could not suppress feeling of satisfaction and pride that such craft were to grace their shed at Low Elswick. The names of the boats are the Sprite and the Ariel, and were manned respectively by Messrs Blenkinsopp and Wakefield (stroke), and Messrs Best and Forbes (stroke). Beyond the mere trying of the boats nothing took place; however, this afternoon there will be several races between the members in the boats aforenamed. 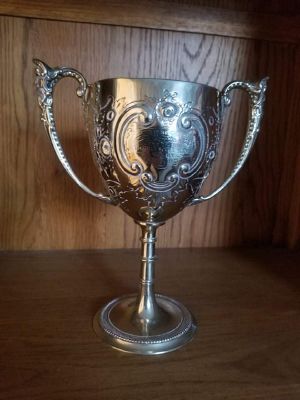 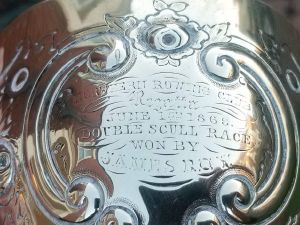 
14th May 1894
The Newcastle Daily Chronicle reported:
The boathouse of this club was formally opened on Saturday. The weather was beautiful, and in every way the occasion was of an auspicious nature. Among those present were to be noticed Councillor Fitzgerald, Councillor Scott, Messrs. J.B. Radcliffe, Mr. 0.J. Perkins, J. Mackay, Dr. Slitter, H. Taylor, W.J. Metrit, W. Newton, Peter Nelson, James Hunter, R. Lawson, W. Bolton, William Kennedy, Walter Burke, J. Hall. secretary of the Whitley Regatta Committee. The proceedings were inaugurated by Mr. T.J. Forster. who, in presenting Councillor Fitzgerald a silver key wherewith to open the boathouse, expressed his pleasure at being present, as President of the Club, to take part in the afternoon's programme. and hoped that the occasion would be the means of infusing new spirit into local aquatics. He then handed to Councillor Fitzgerald a silver key, specially designed by Messrs. Craig and Co., and beautifully executed , bearing the following design:—Presented to Councillor J. Fitzgerald on the occasion of his opening the Northern Rowing Club boathouse, Newcastle-on-Tyne, May 12th 1894. With this, Councillor Fitzgerald opened the door of the house, and declared the premises open for the season. The company then adjourned to the committee room where Mr. Forster proposed the health of Councillor Fitzgerald and the toast was drunk with much enthusiasm. Mr. J.B. Radcliffe spoke a few words in the history of rowing on the Tyne and expressed the hope that the river might produce in the immediate future a sculler as great as any of the champions of the past. This was succeeded by a procession of boats. This whole affair came off in the heartiest and most successful manner, redacting the greatest credit on Mr. Edge, the secretary, who has worked his hardest to bring about such a result.