The Percy Amateur Rowing Club was formed in 1872 and they were granted the lease of a boathouse at the Low Lights area in North Shields, close to what is now the Fish Quay. The boathouse was formally used as a "Salmon Hatchery House" before the Duke of Northumberland's Estate granted the lease for it to be used a Boat House. The main mover behind establishing the Club was a Mr. J.G. Tulloch. There is some confusion over whether the Club ceased to operate and a different Club under the name Percy Rowing Club commenced at Pipewellgate, or whether the Club relocated.

A copy of the lease dated 1872 for the Percy ARC Boathouse at the Low Lights, North Shields is reproduced here. (Reproduced courtesy of Northumberland Estates office.) 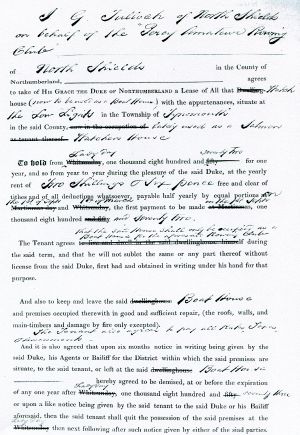 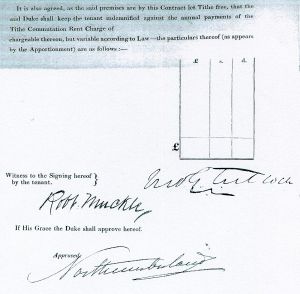 5th September 1874
Bell's Life and The Sportsman reported on an amateur race:
PELTON versus DOBBYN - On Monday afternoon two youths, named Joseph Pelton and Samuel Dobbyn, both members of the Percy Rowing Club, North Shields, rowed a match on the Tyne, the prize being a silver cup. valued at £15. The match arose from certain performances of the pair in the club races, and to settle the question of which is the best oarsman, it was decided that they should contend in Mr Robt. Jewitt’s open boats, No.1 and No.2. The course was one mile extent, the start being at Redheugh Bridge, and the finish at the River Commissioner’s Dredger, about quarter of a mile below the Meadows House. The weather was stormy, and very unfavourable for rowing, a westerly gale blowing down the river, and when Dobbyn won the toss, and chose the sheltered side, odds of 2 to 1 and 5 to 2 were laid on him. Pelton got half a length the best of the start ; but the wind catching his boat on the quarter, drove him right across the river, and before could get fairly straight again, Dobbyn was in possession of a lead of two lengths, Pelton, rowing in slightly better form than the favourite, made up his lee-way when about half the journey had been traversed, and a severe struggle to the finish was witnessed. At one time the boats were almost level, but in the last 200 yards, Dobbyn, who is the bigger and stronger of the two, drew away from his man, and won by three-quarters of length. T. Winship. the well known oarsman, officiated as referee. The loser undoubtedly lost some five or six boat lengths by bad steerage, and afterwards there were offers on the part of his friends make another match, but nothing definite done.

17th April 1875
The Jarrow Express reported:
ANNUAL GENERAL MEETING - The annual meeting of this rising club has just been held - Mr. Tulloch in the chair. A very satisfactory report on the position the club was presented and adopted. This club is honoured with the patronage of the Right Hon. Earl Percy, M.P., as Patron, and T.E. Smith, Esq., M.P., as Vice-patron. Mr. J. Robertson was appointed as the President for the ensuing year.

2nd May 1922
The Newcastle Daily News reported:
The Percy Rowing Club Members have decided to hold a four-oared Jumble Handicap over the half-mile course on the Tyne on May 13th. The entrance fee is 5s per crew and entries, which close on May 7th should be sent to the Secretary at Headquarters, Fountain Inn, Pipewellgate, Gateshead.

27th December 1923
The Northern Whig reported:
Ernest Barry, ex-champion oarsman of the world, was at scratch in the Christmas half-mile handicap held at Newcastle yesterday. Conceding 19 seconds start to J. Clark, of the Percy Rowing Club, he was beaten half length.

3rd February 1931
The Shields Daily News reported:
Joseph Pelton of Cleveland Road, North Shields celebrated his Golden Wedding. As a young man was an enthusiastic sportsman, and was particularly keen on rowing. One the big rowing events in which he took part occurred in 1874, when he was matched against Samuel Dubbyn of North Shields in a mile race (from Redheugh Bridge) in connection with the Percy Rowing Club. Both young men were noted oarsmen, and public interest was very keen, the steamboat "Providence" being chartered to follow the race. The encounter was very keen, Dubbyn winning by three quarters of a length.